Sleep plays a vital role in maintaining good health and wellbeing and getting enough quality sleep at the right times can help protect our mental health, physical health and quality of life 1. By understanding and assessing the specific needs of your customers you will be able to give them advice that is right for them.

Help your customers get back to a healthy sleep routine.

Your patients will have their individual reasons for why they cannot sleep, but there are a range of factors that are well known for leading to lost sleep: These include physiological issues, Lifestyle, poor physical health, certain medications and poor sleeping environments.

To learn more about how you can help people deal with their lack of sleep, download our training guide here.

This a method of improving the quality of sleep by changing practices and habits that are detrimental to sleep. Sleep hygiene can broadly be split into a list of dos and don’ts.

However, it is not the number of hours a person sleeps that is important, but how they feel the next day. If they wake in the morning not feeling refreshed, then it could be an indicator that they have not had enough, or enough good quality, sleep.

Myth: Insomnia has no harmful consequences other than daytime fatigue.

Reality: Insomnia is proven to be associated with impaired memory and cognitive function, as well as increased risk of depression, anxiety and possibly cardiovascular disease.

Myth: OTC sleep medicines containing antihistamines, such as diphenhydramine or promethazine, are prone to misuse.

Reality: When used in line with the instructions, OTC antihistamine sleep medicines are well-tolerated and effective short-term treatment for acute insomnia, with no evidence of misuse.

Myth: Everyone needs 8 hours of sleep each night

Reality: Everyone has their own regular sleeping pattern, which may be less or more than 8 hours.

Myth: OTC sleep medicines containing antihistamines, such as diphenhydramine or promethazine, have the same effects as prescription ‘sleeping pills’ and result in excessive sedation and an unpleasant hangover.

Reality: Sleep medicines containing antihistamines are different from prescription sedatives such as benzodiazepines or zolpidem. OTC diphenhydramine and promethazine can relieve temporary sleep disruption with limited residual next-day effects when used in line with the instructions. 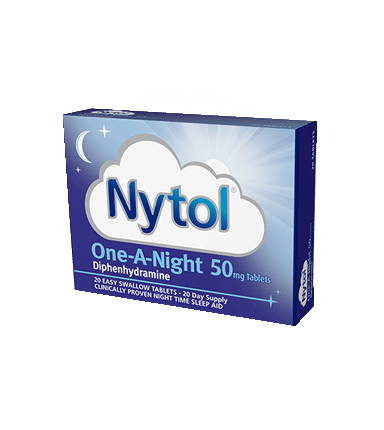